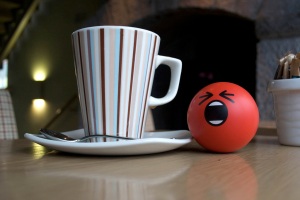 For me, that something is anger.

I cannot remember a time in my life, not a single chapter, in which I wasn’t actively terrified of anger. I learned that anger took many different faces. Sometimes it was a haunting silence—a certain look of the eyes and I’d know there was anger brewing. Sometimes it was the inflection of the voice—a really low or a really loud tone indicated danger. Sometimes it was the entire persona—questions about my day or my books, a refusal to hug or say “I love you” that sounded the alarm. And then there were other times where I didn’t have to interpret anything—the anger was physical, complete with tears, screams, curses and flying fists. My “grandmother” once hit my mother over the head with a cast iron skillet–and she did this in front of my sister and I when we were both young children. Numerous incidents between my parents. And my father… My father is an angry man. Even though you have to really know him and pay attention to his behaviors to know it, he’s always been angry. But it wasn’t just from him that I learned anger meant terror—really, it was from my entire family.

As a result, I spent my childhood doing absolutely everything in my power to maintain peace. Anger, even when it wasn’t directed against me directly, physically affected me. To this day, I shake when people get angry. My hands clench. And I always stop talking. I retreat behind a wall. In every way but physically, I basically curl myself into a fetal position, bury my head between my arms and shake until the angry voices, angry faces and angry behaviors went away. I learned that when someone was angry, I was in danger, both physically, psychologically and emotionally. So I’d hide. I’d try to drown out everything I saw. My reaction to anger was so strong that I can remember my younger sister coming into my room when my parents were violently fighting and asking me if I was okay. She knew how badly it scared me.

Psychology was offered as an elective in the high school I attended. I had a wonderful teacher and I distinctly remember the day we covered defense mechanisms. She went over all the various ways we protect ourselves when we’re in danger. Then she pointed out that defense mechanisms are intended to act as a temporary shield, a way of protecting our minds from fracturing long enough for us to get to safety. It isn’t supposed to be permanent. Once the danger has passed, once we’re back on solid ground, the defense mechanism is intended to go away. The protective coat is supposed to be taken off and hung back in the closet until it’s needed again. It’s not supposed to become glued to our skins. But sometimes it does indeed get stuck to us. Sometimes we forget or we’re too afraid to take the protective off. So we learn to live in what amounts to little more than a bubble…. it prevents us from ever learning how to appropriately deal with or translate a particular emotion or crisis. The defense mechanism that was intended to save our sanity and our lives, in other words, ends up hurting us. We run.

I never get angry. Ever. I get frustrated sometimes. I get upset because I feel misunderstood, or not listened to or even ignored. But I can count on one hand the number of times when I have truly felt real anger in my entire 31 years of life. I don’t get angry. I have all sorts of logical, and true, reasons for this. Right? I mean, let’s think about it. When you get angry, you say things you don’t really mean. But once something is said, it can’t be undone. You can apologize, and you can receive forgiveness, but the wound has been made. It won’t just disappear. Also, how often do you act impulsively when you’re angry, do things you’d otherwise never do? Have you ever destroyed something that held sentimental value to you or to a loved one, or thrown similar away, because you were angry? I haven’t, but I have had others throw sentimentally significant things of mine away because they were angry at me: gifts I’d given that meant something to me, treasures I loved. They weren’t unkind people—they’d just been caught in an angry fist. Anger takes the truth and exaggerates it, uses emotion to justify all sorts of regrettable behaviors. Even when anger provokes the truth, it usually does so harshly. One of my favorite songs is by Rodney Atkins called “Nobody Wins.” It goes, “Nobody wins / We both lose / Hearts get broken and love gets bruised / When we light that same old fuse, again and again / Nobody wins / Slamming doors / We both lost this fight before / And I won’t play this game no more / Cause nobody wins.” The truth in those lines is astounding. Even if you’re actually right, in the midst of a heated argument or fight… nobody listens. Nobody listens because, in a fight, logic and reason don’t really matter as much as being right does.

Anger is Pain’s child—you get angry because you’ve been hurt. But admitting you’re hurt means admitting a weakness. Admitting to feeling intense pain means confronting fear, possible rejection and who knows what else. We’d rather be strong. We’d rather be invincible. We want to defend ourselves, we want to show them how wrong they were. So we hide the pain behind a mask of anger; they compound the problem with every word they return. And then, hours later, when the adrenaline fades and the morning light shines through the curtains, we see ourselves curled in the bed, our faces streaked by tears and an exhaustion born of something more profound than a simple lack of sleep. New wounds have been created from all the angry words spoken. We comfort ourselves by saying things like “they didn’t mean it,” or “maybe she’ll see now.” If the love is real, apologies and forgiveness come; normal lives resume and scabs form over the wounds. But they don’t go away; their existence alters the fabric of our relationships. And while, sometimes, if we’re lucky, our love grows deeper because our arguments bring about true understanding, most of the time, a heavy brick is placed on the now-thin piece of fabric. The weight of the brick is tolerable—sometimes even forgettable–until a new fight takes place, and a new brick is added to the fabric, making the relationship one brick more fragile. It’s juggled, and we adjust…. until a new fight erupts and the cycle repeats itself. How many bricks can the relationship shoulder before it rips a hole in the fabric, and we lose that which is precious to us?

I’m fairly decent at avoidance waltzes. Anger = bad stuff and should be avoided at all costs. Right?

I wish I could self-righteously say “yup! Go for it!” Barricade yourself against that sneaky emotion Anger; Denial is better. But… the truth is… anger is an emotion, an honest one at that. If I get angry and I don’t admit to being angry….I’m sowing seeds of resentment. Instead of the bricks being added to a fabric that’s held together by two hands, I’m adding all the weight of the pain to only the side I hold. Without the weight of the pain being balanced, it’ll break sooner. Anger itself isn’t bad. Anger itself isn’t the enemy. If we run from it, it shadows us and we live life constantly in fear. If something happens that hurts us, we get scared because, if we acknowledge the pain, then anger might follow and if anger follows, the world comes unglued so we stuff the pain deep inside, pretend everything’s okay. We make light of the things that hurt us the most, brush off even the most grievous offenses in order to maintain peace. We learn to smile even when it breaks our hearts to do so. People call us “steady as a rock” even though late at night, we lie in our beds, overwhelmed by the desire to cry for ages.

My pastor says that whenever he and his wife have to have an important and unpleasant conversation, they brew a pot of tea and drink it together while they talk. They’ve created a ritual, an anchor that they can both cling to when the world turns upside down, a port in which they feel safe enough to discuss whatever’s caused them to feel angry or sad. I doubt they enjoy the discussions very much but I imagine that having creating a calm and familiar environment in which to talk helps control anger, helps reign in words that would only wound them further.  The creation of new wounds doesn’t have to be automatic—not if we treated each other and ourselves with respect and love.

The imagery of this calms me. It makes me want to cry because it tells me that chaos and violence are not an intrinsic part of anger—instead, chaos and violence and curses and flying fists and all those things I grew up around—-don’t have to be a part of anger. Ultimately, running from anger is a denial of self. I basically say, “I’m not worth fighting for” every time I choose to stay quiet when something has hurt me. Every time I tell myself, “It doesn’t matter,” I disrespect my own beliefs, my life. Furthermore, if I don’t tell the person who hurt me that his or her actions wounded me, how can I blame them if they repeat such actions in the future? Silence isn’t fair to them, and it isn’t fair to me.

I think, perhaps, I may need to refine my definition of anger. It’s always been synonymous  with “violence” but, tonight, I looked up its official definition and was surprised. The dictionary read:
“an-ger /’aNGer/: (n) A strong feeling of annoyance, displeasure or hostility; (v) Fill (someone) with such a feeling; to provoke anger in”

Strange, but it doesn’t mention the violence at all. Maybe the key is to knowing how to handle the emotion. I’ve also lived by the motto “I can’t control what happens to me, but I can control how I react.”   I wasn’t really scared of the anger;  I was scared of the behaviors.  Tomorrow, someone may do something that infuriates me. I may feel my cheeks flush with indignation and outrage. Normally, my response would be to clench my hands together and remind myself to stay calm. I’d wait a few minutes until the hot flush dissipated, then I’d smile and pretend I’d felt nothing. Instead, maybe I should take the minute to think about how I’m going to respond… what I could say that might promote awareness and understanding. Instead of hiding the pain and resulting anger, maybe I should give the people in my life credit and not assume they’re going to walk out or drop dead if I say, “I don’t think that was fair.” Maybe I should remember, if I should feel a flash of anger, that I can express what I feel without resorting to violence or manipulation and believe the people in my life can react responsibly, calmly; with compassion, respect  and care;  maybe resolution is possible.  And if I find my pulse racing, my tongue glued to my mouth;  if I find myself at a loss for words for the fear that’s choking me… maybe I could start with an  offer to brew a pot of tea.