I’ve been waiting to write this post since about noon today.   Noon is when I saw a picture on Facebook.   The picture was posted by some media site but liked by a couple different friends of mine.  Still,  it didn’t sit well with me, even when I read the 95 comments that had been posted in response to the picture.  Characteristically,  I clicked away from it,  unwilling to get in an online debate, especially when it appeared from the comments that I would be in the minority.  I mean, I wasn’t the only one going,  “huh?”  but there were lots more that expressed positive reactions.  So I clicked away.  But  it didn’t leave my mind.  The rest of the afternoon, whenever I had a spare second, it was there,  festering.   It’s important to note this next fact:  the longer I stayed silent about the fact that I was bothered,  the more bothered I became.

I didn’t save the picture or download it to my computer when I saw it and I didn’t care to scroll down far enough tonight to find it to do exactly that just for this post.  Besides,   when I was in high school, I learned that the best way to study for something, the best way to remember something, is to first read it, then highlight the important parts, then go back and write what you highlighted.  You see it three times that way.   Trust me,  I never failed a test (that wasn’t math related anyway);  it works.    So, I decided to skip finding a picture of the quote and write it myself.  Maybe, I reasoned, it would make me feel better about what it said.  Maybe some as yet undiscovered epiphany would break through the misunderstanding barriers that had thus far been standing in the way of my being able to accept this quote’s message.  Alas, no such luck.  Still,  food for thought in picture format: 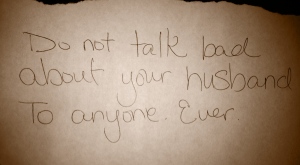 My first thought, upon reading the quote on Facebook, was:  “So what are you supposed to do then?  Not talk about any challenges your marriage is facing?  Pretend that everything is a-okay?”   Without going off too much of a rampage here…  I’ve done that most of my life. I’ve worn a facade to the outside world  that said I was fine so convincingly that, when I try to tell someone that something’s wrong or that I need help, I get a lot of blank stares, followed by a collective chorus of  “wow.”   I know how to be quiet.  I tell myself that it’s being strong:  I am able to handle anything on my own.  I don’t have girlfriends.  I don’t have a group of women, or even one, to whom I regularly talk.  When I talk to other adults, with the exception of my sister and mother,  it is about children 99.9 percent of the time.  I can have the worst day on the planet and still post a Facebook status about how blue the clouds are, or about something cute or funny my girls did,  followed by my trademark  :).   Furthermore,  although I haven’t been in very many relationships at all, I have been in some pretty serious ones.  I have been loved, and I have loved.   And I regularly played the part of  happy, chipper, carefree, optimistic smiley-faced girl….nothing ever was wrong,  I never had a bad day, and nothing he said or did hurt my feelings or left me confused, I never got angry.  Or, at least, if anything wasn’t “fine” I never admitted to it.   Every negative thing that happened to me, or to our relationship, was kept bottled up as tight as I could bottle it.

And it left me void.  It left me feeling drained and tired and alone.

And when all that happens, when the person you love the most on the planet (other than your children, naturally), does something that truly rips your beating heart out of your chest…. what, pray tell, are you supposed to do?   Fight him?  Well,  okay, but we all know in our hearts that fighting doesn’t really solve anything.  It makes you cry and you get really loud and say things that only rub salt in open wounds.   So, after you’ve said your peace and fought it out, you’re left with the pain.  You’re left alone, because he doesn’t understand—that’s why you’re fighting.  You still love him, he still loves you;  he’s still wonderful and almost perfect, and he’s sure of the same thing about you.  But you’re hurting.  What are you supposed to do?  Cry alone at night until the anger fades, and the hurt’s been numbed with time?   You can do that.  I have.  It’s how I lived my life.  I used think (and sometimes still do) that it made me strong.  I used to comfort myself by reminding myself, verbally and out loud, that God wouldn’t put me through that much pain if I couldn’t handle it.   I used to think that it was selfish, asking someone who was burdened already with their own problems, to listen to mine.  Sometimes this still makes my heart pound out a painful song because I still think it’s possibly true.

I have learned something really important.

Truth is more important than comfort.

I am not comfortable with confrontations.  I don’t like them,  and they terrify the crap out of me.  Peaceful, or otherwise, I don’t want one.   I don’t like being in need.  I don’t like the thought of someone seeing me as weak.  I want to try and make it easy for people to want to be a part of my life.   But I don’t have superpowers:  I am just a woman.  And, like any other woman, sometimes I get my heart broken.  Sometimes I get very sad.  Sometimes I am emotional.  Sometimes I am confused.  And sometimes I am “bothered” (read:  angry).  I can keep it to myself.  But doing so hurts not only me, but the one I love as well.   And it doesn’t make logical sense to me to keep challenges that keep trying to rip apart an otherwise strong relationship from trusted friends and family.   They have different perspectives, different ideas, different ways of looking at behaviors that just might help the two of us find common ground again.  Of course, we shouldn’t just complain out the wazoo about all the things he’s doing wrong.  Of course, we should never call someone we love any kind of names—it degrades our loved ones, it degrades the relationship itself, and it degrades you for doing it.   Of course, we should make it a point to mention the wonderful attributes about him which we love.   We should nurture our relationships by offering praise and the showing of affection.  But admitting to a trusted friend that he’s done something that caused me great pain isn’t demeaning him.  Instead, it’s first acknowledging that I am an independent person, separate from him, and my feelings matter too.  Secondly, it’s admitting that he’s only human and can fail.  Thirdly, it’s the vocalization of a request for help: something happened, and it hurt me.   I  don’t understand—what do you think?   None of that is saying he’s a bad person:  it’s saying,  “we’re hurting.”   And if that trusted friend is worth her salt, she’ll embrace me, knowing that her turn to need a shoulder to cry upon will come.

I mean, really, what are friends for?   MOP meetings and movies and someone to add to our list of Facebook friends or twitter followers?  Are friends just the people we see at church once or twice a week, say hello to and hug because we recognize each other?  Are friends just people we call to laugh about our favorite shows, or to swap recipes with?  And if this is really it, if this is really what we interact with other women for…. why bother?  I mean, I can express my joy or sorrow at the winner of American Idol in seconds on Facebook—and receive fairly instant feedback.  I can chat on a computer screen.   If all we’re sharing is the superficial, why go through the extra effort to actually get together, or call, or schedule lunch, at all?    I’ve always been under the impression that friends are on a closer plane to us than acquaintances.  Just because I recognize your face doesn’t make you my friend.   Just because we see each other at the same place and time every week, or every day at work, does not make you my friend.   In order to be true friends, we have to invite someone into our lives, our true lives, and into the thoughts that cross our minds.  Our lives aren’t completely an open book—we do keep some things to ourselves.   But, big things, things that make us cry or hurt or angry, these things need to be talked about with friends, need to be shared.   Real friends will know it doesn’t change how much I love him, or he me:  it’s simply an acknowledgment that we cannot thrive as islands.

It’s not the  “Don’t talk bad about your husband” part that most bothers me.   If you’re wise, you don’t “talk bad” about anyone.  It’s the  “to anyone.  Ever” part that makes my heart cringe.  I think of an abused woman reading that quote on Facebook and bursting into tears because she’s trying to decide whether or not it’s okay to tell someone her husband, whom she loves, has a violent side.  I cringe at the thought of a woman who reads the quote and decides not to tell her friends that her husband won’t stop drinking, even though it’s costing their family their hard-earned stability.    Others may say,  “well, of course, those are exceptions.”  But the only ones that can often see that a particular situation qualifies as “an exception” are outsiders.  The ones hurting are too blinded by the cacophony of emotions:  pain, love, confusion, anger, reconciliation.   Instead of encouraging wives to keep their marital problems to themselves, we should be encouraging truth that’s underlined with understanding.   After all, even if what’s happened to you has never happened to me,  we’ve both felt pain and heartbreak and loss and sadness and anger so, even if I can’t relate to the event itself,  I probably can relate to the emotion behind it.

Our words are our greatest legacy or our greatest enemy:   we should choose them carefully.  Name calling is always bad.  But being strong is exhausting.  Feigning  joy when my heart is breaking undermines and demeans my real emotions.  I can disappear behind a facade,  but in doing so, I’m likely to forget who I am, or ever was, without my partner.  An inner circle of friends keeps us grounded, and provides a safe place for use to remember who we, as strong and capable women, are.  Husbands, partners—the relationship we have with them is sacred and probably the most special we’ll ever share with anyone.  It should be honored and respected.  Lying about that relationship, either to others or to ourselves, throws further darts at it and places it in greater jeopardy.  Nothing worthwhile is ever accomplished through a bleeding smile.  And silence only breeds resentment and further pain;  keeps a wound fresh without allowing it to scab and heal.

Talking bad should never include derogatory comments towards someone’s character, or person.  That isn’t helpful.  But admitting to the right people when his actions stink and have caused you pain…. that’s a responsible and healthy choice.  I speak now about things that truly have hurt me.  I still have trouble telling people I admire or care about when I am upset…. but I recognize that, if I value that relationship, I must get the emotions out.  I must share.   After all…. isn’t it written that — truth — sets one free?

← Our Toy Story The Beauty of Simplicity →