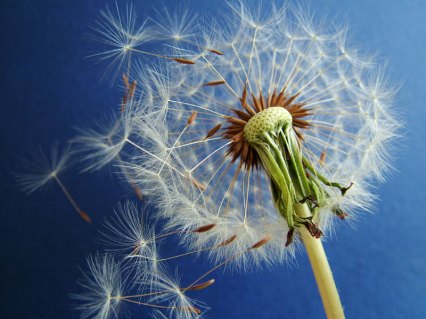 thanks to http://www.guidinginstincts.com for the photo

Today, the girls and I were outside, taking a leisurely walk around the neighborhood.  There is a grassy meadow-like area in our subdivision  We go there to lay on blankets and play cloud-guessing games when the sun is shining and the weather is not too cold.  There’s some awesome big rocks there that they like to climb on, too.  It’s just a nice area.  Usually, however, the grassy meadow-like area does not give much inspiration or thought fodder for my brain.  But, just before we left and headed for home,  we spotted some dandelions.

I have always loved dandelions.

Since I was a child, I’ve thought of them as magical, wish-granting, pixie-dust like blossoms of joy.  I absolutely loved blowing them and watching them float around in the air.   When I was younger,  I liked to pretend that it was the wishes going up to heaven.  I was an imaginative child and dandelions brought me happiness.  They still do.  I used to make wishes on dandelions.  I specifically remember wishing, when I was around twelve, for one of my characters to come alive.   I also remember wishing to meet certain people,  like Tanya Tucker.  I wished for friends. I wished I could own a horse.  Once, I wished I could touch a cloud.  I wished to go to Paris,  France.  I wished to be a famous, world-renowned writer and singer and photography model. I wished for someone to take me to the dance.  I wished to never move again.  I wished to get the side of the bed next to the wall on the occasions when I had to sleep with my sister.  I wished for a dog that would be my very best friend, one who would bark at people who wanted to hurt me or get in my way. Then I wished for a monkey, a pet monkey.  Lots of wishes.

The older I got, though, the less frequently the wishes seemed to come true.  No one took me to a dance, ever.   We kept moving. I didn’t get a lifelong dog who jumped at the chance to protect me.  I never became famous.  And, while some of the wishes did come true (I did meet Tanya Tucker,  I  did go to Paris), the ones that really mattered, the ones that mattered so much I was  afraid to voice them out loud, did not.  Eventually, I became too “grown up” to make wishes on stars… or dandelions.  Doing so made me feel stupid, and childish.  I still prayed—but that was because I was talking to a living God who always had my back, even when He said “no.”  I wasn’t just making fanciful wishes.  A part of me, though, deeply mourned the loss of the child-like innocence that had inspired me to make wishes on dandelions in the first place.  Songs like  “Drift off to Dream” by Traivs Tritt inevitably produced a flood of tears because the entire song is a wish made by the narrator—the grown narrator.

Both my girls love dandelions.  They think of them as special opportunities to cast wishes up to the heavens.  They love blowing them.  And they would never tell me everything that they have wished for, because that might make the wish not come true.   So, when they saw the ones in the meadow, they became excited.  They rushed over, grabbed a few, did our special dandelion dance, made the  wishes and blew them.  We all watched them float away.  The girls then raced on, ready for something new and different.  But I was trapped, frozen momentarily by a wave of…. wistfulness… so intense it was almost sadness.

I have wishes too.

Earlier this week, I passed out and headed to the doctors.  Blood counts are dangerously low.  I sat through test after test, trying to make sure that the underlying cause wasn’t more cancer.  I sat in that doctor’s office, praying to God for the results to come back that I was just severely low on iron.  Anemia, though it stinks when it hits hard, is fixable.  Cancer is iffy. I sat there, remembering how, just a handful of months ago, I was laid out on a table, prepped for surgery, so that they could remove my thyroid and the cancerous nodules that grew in it.  I wish cancer was non-existent.  I wish migraines and anemia were also foreign words.  I wish every infant born lived.  I wish true love existed outside the boundaries of fairy tales and make-believe.  I wish I didn’t have to worry about things like whether or not the stranger in need of a ride on the interstate was really trying to flag down a potential murder victim.  I wish schools were unequivocally safe and every child got a hug morning, noon and night.  And, gosh darn it, I wish all kinds of abuse, childhood and otherwise, never, ever happened.  I don’t need to go to Paris, or to a dance.  I need to be safe—physically and emotionally.  I don’t need to touch a cloud–I need to know without a doubt that my girls are going to make it to adulthood unharmed.  And I don’t need to meet celebrities or to be famous myself—-meeting someone I could trust with all my flaws and scars, someone who’d love me anyway, would matter more.  I don’t need my fictional characters to come to life as long as the real-life ones I’m surrounded by will remember me.

And yet children wish for monkeys and 20 presents for a birthday.  And, the part that gets me, is that they blow the dandelion fluff and make the wishes without even really believing that they’ll get what they just wished for.  Getting the wish, then, isn’t the point. Making the wish is.  I stood there, with the brisk wind whipping my hair onto my face, and the sound of girlish laughter in the distance, staring at a dandelion still in the ground.  So pointless to make a wish, I thought to myself.  Why bother?   Another gust of wind slapped me in the face and one of the girls called to me.  I called back, told them to go ahead   You bother, I thought to myself, because you can drown yourself feeling like Job.  Hope is yours for the taking but, in order to feel it, you have to cherish what is innocent and sweet.  Hope is yours for the taking but, in order to feel it, you have to make a conscious effort to backtalk logic and reason in lieu of faith.   Hope is yours for the taking but, in order to feel it, you have to keep a storeroom of small, seemingly benign, parts of every day tucked away in your heart:  a brilliant sunset,  the laughter of a child,  the feel of the breeze, the sight of the first snow of the year, a dandelion… because it is this storeroom that will sustain you and help you get out of bed on days that you feel like giving up.  We remember Job not really because of all the awful things that happened to him;  we remember him because, despite those things, he never stopped believing.  If we lose the childlike joy, the  childlike wonder, we felt when we first tasted honeysuckle or watched dandelion fluff float away…. that’s when life becomes a chore rather than a gift.   I bother because taking the time out to practice appreciation for what I do have rather than what I don’t helps me both to live life to the fullest and to enjoy it while I do.  Making wishes on stars and on flowers may be silly.  It may be a childish thing to do.  But didn’t Jesus say that the greatest in the kingdom of Heaven itself is a child?

I bent down and picked the dandelion.  I twirled it in my fingers for a moment, watching the beautiful white fluff.  Then I closed my eyes, just for a second, and made a wish.  I opened my eyes and blew the fluff.  I turned my head to watch it ascend into the sky and float away.  When I turned back to catch up with my daughters,  I was smiling.

I wished for a monkey.