A Fairy Tale for Cinderella 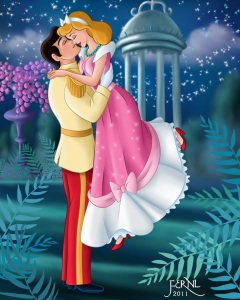 Call me silly, future characters, but I want my next book to be about Cinderella.

And not a she’s-been-through-total-hell-and-is-never-going-to-be-the-same Cinderella.

I think, after Maelea’s story is done, I want to write a story about a girl who grows up in a nice, quiet, safe suburban home, surrounded by lots of friends and a set of loving, protective, normal parents.  Her biggest problem is going to be who is going to ask her to the Prom.  Maybe she’ll have it really rough and she won’t have a date to the Prom.  But unlike Taya or Abrielle or any of those other girls who all had layers upon layers of reasons for avoiding school functions like the Prom,  she will go to the dance and do more than hold up a wall.  Prince Charming just might be laughing somewhere under the fictional disco ball and he’ll notice her.  Not because she’s busy breaking somebody’s arm like Jessie but because one of the defining characteristics of Cinderella is that she’s graceful.   They’ll dance, they’ll kiss and he’ll ask her to marry him.  And kind of like in the movie Steel Magnolias with Julia Roberts, Cinderella’s father will hold her hand and walk her down the aisle.  Then she and her newly wedded husband,  they’ll have a hundred babies and worry about them all when they go out to play on their one hundred bicycles.  The biggest strife of Cinderella’s married life will be acting as a stay-at-home mom to one hundred children but it will be balanced by the fact that her kids’ father is a real man, one dedicated to helping change diapers and get vomited on fifty times a day.   Little boys falling out of trees, thereby earning the idyllic childhood badge of a broken bone (or two),  and little girls tripping over laces that are never, ever tied, thereby earning a multitude of skinned knees, will be the extent of Cinderella’s stress.   Every night,  she and her husband will sit in the cozy library, talking about their one hundred children and also about how life is perfect.  The book will end when Cinderella is ninety years old and her husband is a hundred and they are sitting on rocking chairs outside the castle with a bushel of grand-children (and maybe even a few great-grandchildren!) playing about the castle grounds.

It will be a fairy tale, a happy one.   And do you know the main components that would make it such a happy story?   The first is that, if you re-read the synopsis of the story above, you will see that Cinderella is never, ever alone.  When she is a child, she is surrounded by loving parents.  When she is an adult, she is backed by a loving husband.  There is never a chapter in her life in which, should something catastrophic happen to her, she would not have another adult to turn to.  There’s never a time where, if she should find herself with a gnawing ache in her heart that can’t be filled except by a hug from another adult who understands children aren’t the only ones who need,  there isn’t someone to whom she can turn.   She’s not perfect.   Maybe she’s a bit selfish,  maybe she’s a bit  “high maintenance”,  maybe she’s a bit spoiled.  But she has friends, a husband and two parents who have all seen her at her worst and still choose to stay.

And that leads up to the second reason her story is such a happy one:  the people by whom she is loved have taught her how to trust

Every time she was hurt, she had someone to tell.   She wasn’t expected to be happy all the time.  When she was, she had someone to laugh with. When she wasn’t, she had someone to cry with.  At every important milestone in her life,  someone has been there to share in it with her.   As a result, she has been given the keys by which she can unlock her heart, the keys that will allow her to believe that her most treasured possession–her heart–can be entrusted to someone else.  Showing others her true feelings and ideas and triumphs and concerns is not risking abandonment or sarcastic mockery… Instead, her feelings, ideas, triumphs and concerns… matter.

Trusting someone is telling that person:  “I believe you think I have value.  And because you believe that, you would not deliberately cause me pain, and you will not exit unexpectedly from my life.”  Ultimately, then, before you are capable of trusting someone with your heart and soul, you have to believe you matter.  Because, if you don’t, what’s going to inspire in them a desire to stay in your life?  And is it worth it,  making yourself vulnerable, to people who aren’t going to stay?

Have you ever been on an airplane and looked out the window as you took off or landed?  Have you ever thought to yourself how much the ground and buildings and people look like playing pieces of a Monopoly board game from the sky?  It really gives you perspective.   It reminds you that, in the grand scheme of things, you are not as important as you think you are every time your phone rings or you see the twenty e-mails in your Inbox.  There are actually 7,177,535,369 people in the world as of this minute.  There were 328,432 births and 135,437 deaths today alone.  What makes me different or more worthwhile than the other 7 billion people alive?  Really, what do I have to offer that the next person doesn’t?  The answer makes it difficult for me to trust others;  it makes it difficult for me to really and truly believe them when they say they care.   They say trust is earned but that’s not really true.  Trust is given.  Did you know that I trust perfect strangers more than I trust people I actually know?  Perfect strangers are generally nice to each other, even if it’s just a form of being polite.  Perfect strangers will make gracious comments on how nice you look or how talented.  I was engaged for nine years and very rarely received any such acknowledgments from someone I loved and who I believed loved me.  Perfect strangers will hold doors open for you—a “common” courtesy people you actually know tend to forget.  It is easier for me to talk in front of a large group of people I don’t know than for me to have a difficult or personal conversation with someone whose name I actually know—and the more I know you, the harder it is.  You see, it isn’t going to hurt me if a hundred strangers walk out of a room without buying a book or telling me how great of a writer I am.  But if someone I love and trust doesn’t see time spent with me as worthwhile or enjoyable, my heart and my confidence become endangered.

Even self-proclaimed hermits like Henry D. Thoreau admitted a need for occasional human contact.  And God had something deeper in mind for Adam than an acquaintance when He created Eve.  Having someone take the time to share himself with me is a privilege and displays a trust that is mind-boggling.  When someone opens up to me about his life, it reassures me that he finds me valuable than if he just said I was because opening up requires at least a basic level of trust.   It’s a gift.  When readers e-mail me or write a review of a book in which they acknowledge feeling like one of my characters, it isn’t just praise… it’s affirmation that I’m not crazy, that there are others who think and feel like I do.  I’ve been taught that sentimentality is a flaw…. that to express sentimental ideas marks you as little more than a stereotypical damsel in distress.  But in order to experience the fullness of the fairy tale, I have to give myself permission to be whoever I am at whatever moment in time I find myself.  The truth is, sometimes I –am— sentimental.   The truth is sometimes, especially lately, all I really want is a hug.  The truth is, I’m likely to over-analyze everything you say to me, thereby misunderstanding about half of what you really meant.  And I’d rather sit for three hours alone in a doctor’s office with an IV in my arm than ask someone to take time to sit with me.  I’d rather laugh and play than talk about why I’m not in bed at three in the morning.  It’s not that I enjoy being “mysterious.”   It’s not that I have any desire to have secrets.  It’s just that I’d rather have someone to laugh with than no one at all.  Smiley faces are more apt to draw in friends than a conversation about how the current research and book is making my mind and soul explode.

I don’t rest for many reasons but one of them is simple:  I don’t like the feel of being alone.  I hold a pillow and sleep with a couple more against my back so that I don’t feel quite so physically alone.  I’ve been alone all my life.  Even when I wasn’t physically alone, more often than not, I was emotionally.  It’s a permanent state of being that I’ve grown rather familiar with.  I don’t question it much anymore.  But there have been a few times when I haven’t been alone, emotionally or physically, times when I felt connected to someone else, whether that person be a stranger at a book signing or a valued friend.  What I’ve learned from those moments is that the bridge from loneliness to companionship is trust.  Ultimately, trust is the key to things like peace and love, companionship and confidence.   It takes courage, determination and an optimistic spirit to put your emotional well-being into the hands of another person.  But my character Abrielle, she did it.  So did Aria.  Anna did, too, with Ash.  And Cinderella…  Cinderella literally escaped a lifetime of emotional abuse in order to freely offer her heart and trust to a prince she’d only met once.  Ultimately, you see, while girls are still made of sugar, spice and everything nice…hope, time and trust are the ingredients of the best fairy tales.

← One for the Other: An Excerpt Family Ties →