Open Letter To My Heart 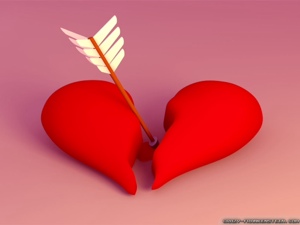 There were so many arrows.

One after another, their poisonous tips pierced your tender, malleable flesh.  Each arrow left a different wound on you—-some of the wounds were skin deep, just barely grazed you, while others soaked all the way through, damaging deep parts of you.  The first time you beat so quickly I could feel you thumping in my chest—-I remember.  Doctors diagnosed you with tachycardia but, really, fear caused you to skip beats and to race, even while at rest.   Hearts are like elephants: they never forget.  You remember things my mind doesn’t.  It’s why the dark still frightens me:  you remember being unexpectedly awakened by a damaging touch.  I was only a child,  five,  the first time.  But I clearly remember feeling you break.  There are no adjectives big enough, no analogies dramatic enough, to capture what fear, or real pain, is.  But you don’t forget it.  There are some moments that are so big you know, even while you’re going through them, that they are life-changing.  That first night, when we couldn’t dodge the arrows, was one of those moments.

The smell…  his smell seemed to reverberate through all your layers until, even today,  thirteen years removed from it,  certain smells cause you to squeeze painfully inside my chest.  And hands.  I remember, as I grew older, thinking how odd it was that hands free from callouses could be so degrading.  Only, it wasn’t really his hands that hurt: it was the power you felt through them.  The pinches, the squeezes, the “pets,”  it all made you constrict until you doubled over yourself.  Soon, I learned how to hold my breath and count…. one, two, three, four…. before slowly, consciously, releasing the air in my lungs through my nose.  I wanted to exhale quickly, to gasp for air, but I didn’t.  I controlled it because how I breathed was the only thing I could control.  I didn’t realize the stress holding my breath put you in, though.  I didn’t understand that being deprived of oxygen while dodging poisonous, emotional arrows would make you double up in speed.  I was trying to protect you.  I thought if I could focus in on something else, I could keep the arrows from hurting you.  So I focused on my breathing.  On the ceiling.  On the fictional characters in my head.

There are so many scars all over you.

But, in the midst of all the mind-numbing terror, you did something extraordinary.  Even while, at such a tender age, you thought life was ending, you did something courageous.  Even when every nerve ending in my entire body was being overwhelmed with paralyzing sensations, you did something special.  You didn’t harden.  Stone by stone, you built walls.  Some really high, some nearly indestructible.  Walls made of smiles, amiable chatter and quick hugs.  Walls guarded by evasion and conscious but sincere humility.  You were afraid of being pierced again, so you built walls.  But you resisted cynicism.  You evaded bitterness and anger.  You stubbornly insisted men were not evil, even when all the evidence before you suggested otherwise.  In the eye of you, dear heart, in the very, very center of you, I know there is a room whose door has never been opened.  In that room, you hold a dream of comforting touch, of male strength that would never seek to degrade you, of the illusive true love.  Despite the mind games of being forced and coerced into obeying his commands, you aren’t afraid of life.  You stand in awe of the color in the sunset.  You never pass a dandelion without making a wish and blowing its fluff.  You dance and treat every moment with tenderness instead of resentment or skepticism, even though there’s a huge scar down your middle where you were tortuously ripped apart.  You hope.  I don’t know how, but you do.

You think the worst part is when the body is violated so viciously.  You think that’s when the mind fractures.  But it’s not.  The worst part is the shame that comes with knowing you’re unworthy of affection, of knowing that you’re tainted by something hideous you can’t even define.  The worst part is not knowing why you’re shaking even though there’s no one in the room with you anymore.  The worst part is the fear that you’re dying in the middle of such physical and emotional war-like circumstances.  One minute, you’re a little girl.  The next…. the next, you’re not.  Soldiers are trained to expect the worst but children believe in Santa Claus and magical creatures known as grown-ups.  Soldiers know they’re voluntarily entering a war zone.  Children…. children have no knowledge of what war even is, until they feel a heaviness over them and their bodies shaking and their heads roaring with screams they’re not allowed to voice.  That’s what you went through.  A war.  And it was a long, long war.  Being angry or distrustful or even cynical would make sense.  Being able to see each day as beautiful and hopeful and worthwhile is nothing short of a God-given miracle.

I know you’re tired, Dear Heart.  You’re tired of having to work overtime.  You’re tired of dodging poisonous arrows.  You’re tired.  But I want you to know I am so, so proud of you.  Your strength isn’t in being able to survive the war, for millions of children do, but for maintaining a belief in all that is good and sweet and beautiful.  With so much evil burned into you,  it would be so easy to view the world, and the men in it, as heartless and terrible.  But you don’t—instead, you write about tender men who are creative and loving;  instead of demonizing all men, your books portray men who love justice and children.  You don’t think everyone is out to harm you, and you’re not teaching the girls to be leery of men but rather to trust in the good of humankind—male and female.  What a remarkably beautiful thing to do… beautiful and brave.  Everything you believe in, and fight for, is a testimony to the power of God and to the resilience and beauty of life.