For as long as I can remember, I’ve had an intense, somewhat irrational,  fear:  a fear that I was going to die a premature death.  I didn’t know how, I didn’t know exactly when… but it was a fear that kept me close to the sidewalk.  It pushed me to live my life as though every second was my last:  I crammed as much as I physically could into every day.  Even as a young girl, I failed to see the point in “being silly;”  I thought it wasting time.  While everyone else I knew partied at pep rallies and at friends’ houses,  I spent time alone, writing stories that made me cry and reading books that made me hope for a happily ever after.

When my daughters were born, the fear intensified.  I wrote letters to them all the time,  took literally thousands of pictures and made our lives a never-ending adventure.  Every day, we went somewhere new:  memberships to museums and science centers around the city were investments I thought nothing of because they allowed me to build a bubble around the girls and I;  they helped me create magical memories.  There were layers to my reasoning for this kind of lifestyle:  one, playing with my girls gave me a freedom I’d never known.  I now had a legitimate reason for being silly,  a good reason for stepping out of the safety box I’d deliberately always kept myself in, a valid excuse for not being so serious all the time.  The outside world, with its stress and everyday obstacles, fade away when you enter a world of make believe and play.  No one had ever been able to make me laugh like my daughters,  and I found I had never been happier than when they smiled.  Exercising my imagination, and teaching them to use theirs, was addictive.  But, in addition to truly enjoying the time with them, I also did it because I was trying to secure so many memories with them that they wouldn’t forget how much their mother loved them, if I were to die suddenly.  It really wasn’t that I was afraid they would forget me as much as I was afraid that they wouldn’t really know, deep down in their bones, that they were adored and loved more than anything on this earth by their mother.  I wanted them not only to believe it but to know it so strongly that they would never, ever question it.  One of our favorite books to read was “The Mommy Date” and one of the last sentences in that book reads,  “They’ll know I loved them because we took the time to play.”  That sentence hit me hard and I made it a point to show my girls that play was important to me,  that I would always have time to play.  Mark Twain once said,  “Nothing that grieves us can be called little.  By the eternal laws of proportion, a child’s loss of a doll and a king’s loss of a crown are events of the same size.”   That quote was a constant rejoinder in my head, reminding me that whereas I found bills and putting food on the table were important, the names of every My Little Pony and stuffed animal in their collections were important to them.  As a result, I needed to know those names as much as I needed to pay the bills.

Psychology taught me that most of us have memories, even if they are vague, beginning around age five.  Because I knew that, when my youngest daughter  turned five (my oldest was then 8),  my heart involuntarily relaxed.  I remember thinking to myself,  “They are old enough now to remember.”

Through the scary surgeries and days of sitting hooked up to an IV in my arm every three months,  through every conversation with a doctor who “doesn’t know” or “can’t explain” or just refuses to look at  my whole history because it is “overwhelming,” my girls have been the light I keep my eyes focused on.  Staying as healthy as I can is a priority and, frankly, not because I care that much about life itself.  It’s a gift, yes, and I appreciate the beauty of the world, the kindness of people, the ability to breathe… but  I’m not afraid of dying.  Rather, staying healthy has been a priority because I love my little girls and I don’t want them to grow up without a mother.  I have dreams of  teaching them to drive a car, of seeing their faces aglow when they come home from their first date, of watching them graduate, of seeing the women they become as they find themselves in the next ten years or so. They remind me of what wonder is and how to view the world as though everything is new and beautiful.

Over the last week or so, I’ve been busy every night, making a yearbook for them, as a gift for the end of the school year.  I homeschool the girls and I wanted them to remember how much we’ve accomplished this year.  As I flipped through the 3, 341 (that’s the actual number, not an exaggeration) pictures taken since school started in August, sentimentality washed through me.  We’ve been through a lot the last several years.  But we’ve also had some very special memories.  We always have.

I remember one of our first trips to Chattanooga, years ago.  We went to visit the Aquarium and the Creative Discovery Museum,  but we also found some cardboard and slid down the huge hill.  We laughed so hard.  Every now and then, we’ll still talk about the trips we’ve taken to the beach–the first time they ever saw the ocean, they were both little, but we went on a pirate adventure.   The girls remember wearing the patches over their eye and searching for gold.  Once, I filled a kiddie pool with water and put apples in it, then showed them how to “bob for apples” because we were pretending we were at the carnival.  One of the best purchases ever made was the puppet theater.  We don’t do puppets much anymore, but we still love Quakers, the yellow puppet duck that quacks, and Chocolate Pudding Applesauce Oranges, the bear whose name was so funny.  I still remember how hard we laughed when we played Human Obstacle Course with the two of them crawling over my back and under my belly.  We still play Lava and impromptu games of Minute to Win It.  We’ve spent hours baking homemade bread from scratch, never caring at all about the mess the flour made on our hands or our faces.  We planted pumpkins in our yard one year.  Every year, we order live caterpillars and spend weeks oohing and aaahhing over their metamorphosis;  it’s a beautiful thing when we release them and watch as they fly away, beautiful butterflies.   No matter how old I become,  I will always remember some of the funny things they say,  I will always marvel over how insightful they sometimes are during our Chatter Chats.  My oldest one signed me up, on her own, without my knowledge, for online dating sites because she “wanted me to be happy.”  I will never be able to go to places like Beech Bend without remembering the wonderful memories we’ve made there over the last  twelve years (and counting).  The stories we’ve made up spontaneously at bedtime, the songs we love.  Some of the most beautiful videos I’ll ever see are of the two of them dancing in the rain:  we’ve done so since they were little, both literally and figuratively, because I wanted them to know that, even when the storms come,  rainbows are waiting behind the clouds.

I won’t forget not only because I love those girls with everything I have but also because hearts are like elephants: they don’t forget. It’s a reassuring phrase tonight.  There really are some moments in life that seem to freeze, some days where it feels like the heart is being held in a comforting embrace; there really are times when, for brief moments, all we feel is loved and special.   In those moments, everything that really matters feel as though they are placed within our palms:  acceptance and understanding,  connection and attention.  When these magical moments, magical days, come into our lives, they are engraved upon our hearts.  Just as elephants can recognize friends and family members even after being apart for decades, our hearts don’t forget the moments we felt were special or meaningful.  Just as you never forget your first real kiss, or the details of your wedding day, we also don’t forget the times when ordinary days felt extraordinary.  My  oldest won’t forget seeing One Direction in concert.  My youngest still talks about the My Little Pony convention we attended when it came to town.  When asked recently what their top favorite memories of the year were, Breathe replied, “Laying on the bed and talking with Mama about boys” and Alight replied, “Staying with you at Opryland on my birthday.”   Hearts are like elephants:  they won’t forget these moments they felt were special, no matter how much time passes or whether I’m physically here beside them or not.

There are people who came into my life only for a short while and then were  gone again who I will never, ever forget.  People like Joey,  a few important  teachers, a friend or two who made me feel special.  These people are gone now from my life—I don’t see them, I don’t even know where to find some of them.  But the gifts they gave my life are still meaningful today, years later.  If I were to see them on the street, I would hug them, tell them thank you and relay how much their kindness meant to me.  Because hearts are like elephants; we don’t forget. Some days, I notice that fear that haunts me hanging around.  Sometimes, I feel afraid. Afraid that I might not have as much time as I would hope to have.  Afraid that I might not be able to give my girls memories I’d like to.  The knowledge that we are not promised tomorrow is never far from my mind.  But, in looking through those thousands of pictures, I’m reminded that some of the best times for my girls and I have come when I simply relaxed and enjoyed the moment.  We play a game called Lost.  We’ll get in the car and the girls will give me directions until we are truly Lost.  It’s a game I invented because, one night when they were small, I really did get lost on accident and they were scared.  Instead of leaving them with a memory of fear, we turned it into a game and got even more lost.  Though we aren’t guaranteed tomorrow, we do have right now, and we have the ability to turn storm clouds into rainbows;  gray memories into colorful ones.  When we sleep out on the trampoline, or when we go for walks, we’ll stare up at the stars and talk about what shapes they make.  We’ll make up stories about little boys who catch falling stars, leaves who never die.  We’ll talk about boys and My Little Pony;  we’ll swim with mermaid tails and hug stuffed animals near at night.  We’ll hold hands and pray;  we’ll hug each other when things are scary.  We’ll keep living life the best way we know how, putting one foot in front of the other every morning.

And, in the end, our hearts will be a scrapbook of the memories we won’t forget. 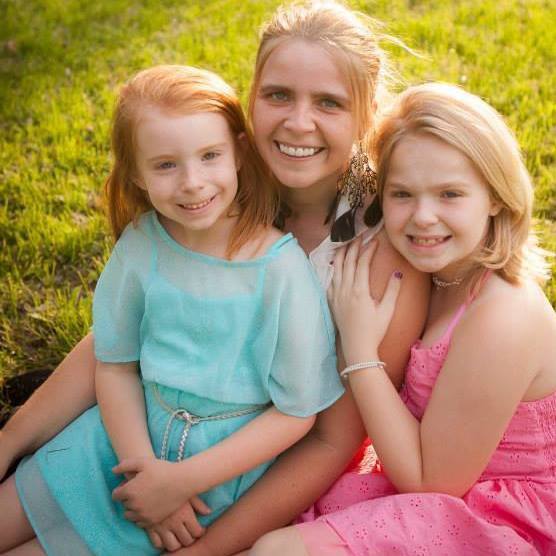